…Sunday was a good day.

In what might be the slowest arriving “news flash” since Andrew Jackson defeated the British in January, 1815 in the Battle of New Orleans (never got word that the War of 1812 was ended by a peace treaty 3-weeks earlier), I am back from Albuquerque where the birthday gods were looking out for me.  It was a very easy trip by my usual standards, and an all-around great meet.  While the race itself wasn’t a time for the ages, as I get older I take them any way I can get them….

Getting the last-minute weekend FedEx trip to San Francisco worked out great.  Not only did I make a couple extra bucks, but it got me out to the west coast and took a lot of the pressure off my travel plans.  After the overnight cross-country flight, I grabbed a couple of hours of sleep in the city then hopped on the BART train and got back down to SFO Saturday afternoon.  San Francisco – Phoenix – Albuquerque on Southwest Airlines, folks there very accommodating and the travel was as painless as it gets.  I was in my hotel by 7pm, had a late dinner then hit the rack. 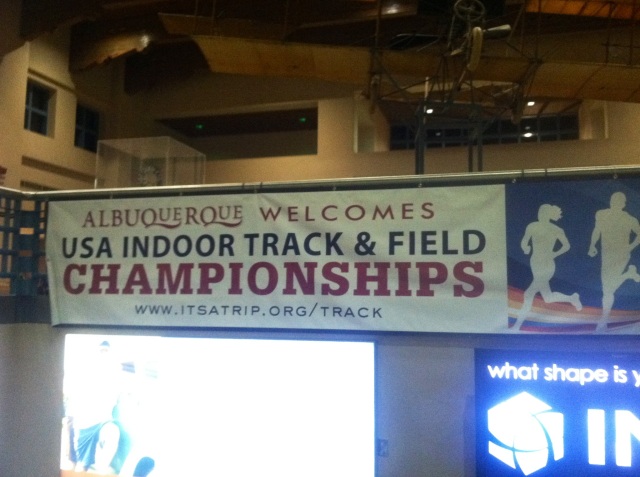 I knew I was in the right Albuquerque...

I wasn’t in any hurry to get over to the convention center where the meet was being held because the Sunday events didn’t begin until noon so there wouldn’t be anything to watch beforehand.  It was good to have run there last year – I knew how to get there, where to park, and the basic layout of the facility.  Like Eugene in June, these masters invitational races at the US National meets are great because you are treated the same as all the world-class athletes who are there.  This meet would decide who secured spots on the indoor national team heading to Turkey next month for the IAAF Indoor World Championships, so the stakes were high for many of the athletes.  I am not a track and field fanatic so I did not recognize many of the men and women warming up around the arena, but certainly knew many of the distance folks such as Galen Rupp, Jennifer Simpson, and Matthew Centrowicz.

I warmed up, then started to see a couple of the other guys I knew from previous races.  The entered field of 7 ended up being only 5, with the biggest subtraction being Charlie Kern.  Charlie has dominated the masters mile for several years, so even though I hadn’t seen any results of his for the 800m I certainly considered him the favorite based on talent alone.  Part of any race is making it to the starting line though.   I heard he unfortunately suffered an injury and could not make the race, so with that news I felt that the race was now wide open.

We were eventually marshaled and led out to the track.  The women ran first, then we were given our lane assignments once on the track.  The stands were pretty full which is always cool – quite a difference from the smattering of fans (wives and kids) we are usually treated to in masters competitions.  The start was a two turn stagger in lanes – a nice way to get everyone out cleanly.  I had hoped to run conservatively – the perfect scenario would have someone taking the race out and coming through the quarter-mile in 59 seconds.  I thought that wouldn’t be too taxing, and would allow me to hopefully be in a position to go for it at the end and maybe run something in the vicinity of 1:58-1:59.  With the training I had under my belt, Albuquerque’s altitude, and the assembled field, I thought that would put me in a good position to challenge at the end.

Chris Simpson and Brent Jones got out pretty quickly after the gun, so I didn’t have to make the first dreaded decision about whether I let the race crawl or take the lead myself (not most desired option after several disasters last year).  It felt faster than the 200m split (30.8), so I was in no hurry to give up on my good third position.  The second lap about the same, and I moved into second as we came through the 400m mark (30.7/61.5).  I could see that the sub-60 second plan had not materialized, but even though I felt really good I liked my chances staying right where I was.  As we came down the homestretch of lap 3 I was very anxious to pass and start my kick, but forced myself to remain patient.  Chris Simpson led us through another lap almost identical to the first three (31.0), and at this point I was doing everything I could to hold myself back.  On the backstretch I pulled along side him and then passed, covering the last 150m pretty smoothly.  I knew when I had the wherewithal and strength to actually think about my arm action (usually the first thing to go and sometimes pretty ugly in tough races) I was feeling pretty good.  About 29.0 for the final circuit, finish time 2:01.61.  I had no problem with the time, I have come to appreciate any time I can break the tape.  Chris was a close second and Brent Jones right behind him.

Here is the action, little better coverage than the home videos usually used…

The women’s winner (Lisa Ryan) and I got our 15 seconds of fame on the medal stand afterwards, then immediately had the hardware taken away because apparently USATF failed to order our medals.  The officials said they were going to send them to us after they were ordered and received, but I will believe that when I see them.  After the DQ confusion with Mark Gomes last year in Eugene I was originally awarded second on the medal stand – the gold from that meet never materialized after many guarantees so I’m not holding my breath on this one either.  Not a big deal though, it was a great experience and that was what was important.

Lisa and I were then led down the chute back to the athlete area, but were stopped short of there for our “winner’s interview”.  While she was giving hers I was approached by about a dozen of the volunteer kids who wanted me to autograph their meet shirts.  They obviously had me confused with someone of importance, but I didn’t tell them that – I just signed them all “Galen Rupp”, much to their delight (“You look much older in person.  Fatter too…”).  Just kidding (about being an imposter) – the kids were great and it was cool that they thought I was somebody worth their time.  Unlike some prima donna celebrities I never turn down an autograph request (this being my only one).  I then got my turn in front of the camera, where I proceeded to babble like an oxygen-deprived dope.  For your viewing pleasure….

After cooling down with Brent and Lance Elliot, we got back to watch the men’s 800 and 1500m races.  I then grabbed my stuff and made my way back to the airport where I stumbled right on to a non-stop Southwest flight to Oakland (I luv SWA!).  I again took the BART to my San Francisco hotel, and was sitting down at a Fisherman’s Wharf fish house by 8pm with a warm bowl of clam chowder.  Fantastic day.  I know these opportunities are going to get fewer and farther between as I climb the age ladder, so I am thankful that this chance ended up being everything I could have hoped for.  Happy Birthday to me I guess…

Got out for a great run on Monday in the city, will go into that another time.  If I don’t press ‘submit’ on this one my editor will be all over my butt.  I am writing from Venice Beach (no rest for the weary) and the sunny (but not warm) weather is calling me.  Maybe it’s the fish tacos, can’t tell – whatever it is I am outta here.  Masters nationals in 3 weeks in Bloomington IN (University of Indiana), look out hoosiers…

I am a 45 year old masters runner from Central Pennsylvania. I have been participating primarily in track events since turning 40 in 2009. This season has produced marks that I have not run in several years, I believe primarily due to starting a strength and flexibility program here at Elite Athletic Performance - I've felt stronger and faster than I have in a long time. That, coupled with lots of underwater running, has kept me healthy and fit - at this age those are things I no longer take for granted... I run USATF events with a team out of Philadelphia, the Greater Philadelphia Track Club. They are a great group who have played a big part in making the sport enjoyable for me again. I also run local races for HydroWorx Track Club, supported by HydroWorx here in Harrisburg PA. Their underwater treadmills and training center has proved to be a crucial part of my training, rehabilitation, and recovery programs. I set personal records in the 800m (1:56.06) in 2010 and in the 1500m (4:02:63) and mile (4:23.48) in 2011. Despite the fact that I am not getting any younger, I nearly PR'ed recently and set the M45 indoor world record in the 800 meters at the New Balance Armory in New York City. I ran 1:56.10, besting the 9 year old record by less than a second. I feel like there are still more big things to come... I am married and have two daughters. I am an assistant XC coach at my alma mater, Cumberland Valley High School here in Mechanicsburg PA. I am also a 1991 graduate of the US Naval Academy, currently working as a pilot for FedEx after serving 10 years on active duty flying in the Navy. Beat Army! Beat Army!
View all posts by Nick Berra →
This entry was posted in Competitive Races, Masters Running, Masters Track, Running, Training for Runs, Uncategorized and tagged 800 Meter Run Masters, Galen Rupp, IAAF Indoor World Championships, USA Indoor Track and Field Championships. Bookmark the permalink.

1 Response to This Just In…