As I mentioned yesterday (in a very long-winded fashion, according to my mom), I am here in Pittsburgh for the GNC Live Well Liberty Mile later on this evening.  This race has been designated by the USATF as the Masters National Road Mile championship, so not only will this serve as a fun road mile, but a title and some cash are on the line as well.  I was informed and sold on this race by an ex-Cumberland Valley runner and now an intern member of the race committee Ryan Hogan, who ironically has drawn the duty of coordinating the logistics for the masters division of the race.  Glad he kept the press on me, because it’s been a great experience thus far and I am excited to get out there and run the roads of Pittsburgh.

We drove out yesterday in a two-car formation with my family as well as my parents.  We caught a great Pirates game yesterday afternoon, where we just happened to run into Anson Flake (Mr HydroWorx) and his family.  Small world!  His kids and mine have been running around together for as long as they can remember, so they joined us for dinner and a trip to the top of Mount Washington for some cool views of the city at night.   Ice cream on the way home of course topped off a great evening.  Had to cut it short though in order to get to bed at a decent pre-race hour… 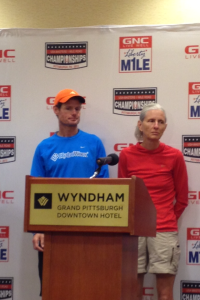 Wishing I had a press secretary after a particularly tough question….

This morning was the press conference of course.  Just kidding – first time for yours truly, I’m not sure what anyone really wanted to hear from me but at least they didn’t ask me about the Middle East peace process or my opinions on global warming.  It was good to meet some of the open athletes as well as some of the other masters folks that I had not known prior to this event.  We then took in a quick tour of Heinz Field (Steeler Nation!) and grabbed a quick bite before I’ve retired for some rest and a little dose of motivational Shark Week – nothing gets you fired up more than seeing some sharks tear into helpless seals.  I wish I could dominate the roads like the great whites dominate the seas – one can only hope…

The course tonite is out one major city street, over a block, then back on a parallel street.  That’s good for spectators to get two looks at the runners instead of the traditional point-to-point course where you only get about 10 seconds of action.  I’ll walk the course when I go to warm up, but how many surprises can there be in essentially two straight lines? (twice as many as in one straight line I suppose, but still….)  With the easy week under my belt I feel pretty good going into this race – last week’s track meet served as a good warmup for this event, even with the crummy 1500m performance.  I ran 4:24 in Harrisburg a couple of weeks ago, but that was following a couple faster open guys under little to no pressure.  This time there are some expectations, as well as the “age-graded” factor, so the pace and strategy will probably be much different.  If the title was the only thing on the line it could very well become a tactical race – just looking for the win.  Being a USATF road race though they offer just as much prize money for the age-graded winner as the overall winner.  To be competitive in this department I’d really have to run a good time – ‘tactical’ probably won’t cut it.  One thing you can count on with me though is whatever plan I have going in usually isn’t the plan I have coming out, so I hope to just run well, have fun, compete, and hopefully if I do all that things will work themselves out.  It wouldn’t hurt to run 4:20 though….just saying.

Hopefully its a bad week to be another master runner….

I am a 45 year old masters runner from Central Pennsylvania. I have been participating primarily in track events since turning 40 in 2009. This season has produced marks that I have not run in several years, I believe primarily due to starting a strength and flexibility program here at Elite Athletic Performance - I've felt stronger and faster than I have in a long time. That, coupled with lots of underwater running, has kept me healthy and fit - at this age those are things I no longer take for granted... I run USATF events with a team out of Philadelphia, the Greater Philadelphia Track Club. They are a great group who have played a big part in making the sport enjoyable for me again. I also run local races for HydroWorx Track Club, supported by HydroWorx here in Harrisburg PA. Their underwater treadmills and training center has proved to be a crucial part of my training, rehabilitation, and recovery programs. I set personal records in the 800m (1:56.06) in 2010 and in the 1500m (4:02:63) and mile (4:23.48) in 2011. Despite the fact that I am not getting any younger, I nearly PR'ed recently and set the M45 indoor world record in the 800 meters at the New Balance Armory in New York City. I ran 1:56.10, besting the 9 year old record by less than a second. I feel like there are still more big things to come... I am married and have two daughters. I am an assistant XC coach at my alma mater, Cumberland Valley High School here in Mechanicsburg PA. I am also a 1991 graduate of the US Naval Academy, currently working as a pilot for FedEx after serving 10 years on active duty flying in the Navy. Beat Army! Beat Army!
View all posts by Nick Berra →
This entry was posted in Aquatic Fitness, Cross Country Running, Harrisburg Mile, Hydrotherapy, Uncategorized, USATF Indoor Nationals and tagged Baseball, Competitive Races, Harrisburg Mile, HydroWorx, Live Well Liberty Mile, USATF. Bookmark the permalink.